Maybe there is something to this Mayan Calendar prophecy after all. The occurrence of natural disasters in recent years is unsettling to say the least. As if an earthquake and tsunami weren’t enough, throw in a potential nuclear disaster for good measure and the Japanese have to wonder what could possibly come next. Sadly, no amount of money can repair the lives of the Japanese people who lost family and friends in these last few days. It puts things into perspective. Perspective is something investors need as this natural disaster has begun to morph into a financial disaster as well. As I write this letter Tuesday morning, March 15th, the market futures are down dramatically and we’re looking at the makings of a nasty turn in sentiment (at least in the short-term) for the equity markets across the board.

Let’s start with the Japanese economic situation. Japan was already the most indebted developed nation in the world, and this catastrophic disaster is only going to make that situation worse. We should take a good hard look at what is going on over there because that could be us someday. Clearly, there are differences, but unfortunately there are also similarities. The U.S. could use a serious dose of fiscal restraint, and while budget cuts are never fun, being swallowed up by debt is even less fun. Speaking of debt, March is the biggest month of European debt rollovers (refinancing), which means we will get a better idea of how bad the situation across the other pond could be. It’s starting to look like the dollar could reverse course here and begin to gain ground on the Euro. When this has happened over the past couple of years, it has been good for treasuries and bad for equities and commodities.

Trying to predict the market has made many very smart people look foolish over the years. I suppose it’s better to look like a fool than actually be a fool, but I’m not sure that’s any consolation. If we’ve learned anything it’s that nobody has a crystal ball. Even if you think you’ve got everything figured out, some idiot can fly a plane into a building or Mother Nature can get really cranky and just like that everything changes. This is why we have our portfolios structured the way that we do. Admittedly we have been overly conservative for the past 18 months. When you look closely at where we are, and how far we’ve come since March of 2009, it doesn’t take a nuclear physicist to realize that the market has shot up like a rocket since then. There have only been two other occasions where the stock market has increased by 100% in 102 weeks or less. 1934 and 1937, and in both instances the market didn’t stay there for very long. It’s not to say that history will repeat itself, or that we have a crystal ball, but you know what they say about people who forget their history.

Buy and hold is dead. At least for now, it may be resurrected some day but until that day it is not a strategy that should be employed. We believe we are still in a secular bear market. That doesn’t mean a one-way ticket to financial Armageddon, it simply means that during a secular bear phase, the general longer-term trend is sideways or down. Along the way, both powerful bull and bear market swings are quite common. Some important technical indicators have been breached this week, and while these events are noteworthy, it is also important to keep in mind the technical’s haven’t been very reliable lately. It is quite possible that the trend is about to reverse course and the markets may head down. It is also possible that this is just a very short-term situation and the upward trend could continue. The truth is, nobody knows for sure. That leads us back to our current portfolios. We are positioned exactly the way we want to be. Even our moderate growth models are only 40% in equities right now, which gives us an opportunity to increase equity exposure if we see the markets continue to sell off. We are also limited in the damage that will occur if the markets continue downward. The short-term bond portfolios have held up very well over the last couple of weeks, and should this current downward trend continue, we believe the short-term bonds will be a nice little safe haven. Only time will tell for sure.

It’s ironic, but yet laughably predictable, that we have gotten more requests over the last 6 weeks to put more money in the stock market that at almost any other time over the last two years. Let’s take a look at a chart of the S&P 500: 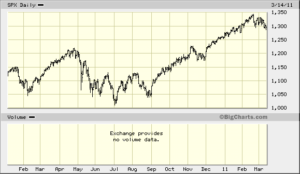 As you can see, the S&P 500 index made virtually no progress from January to October. Then from October through the beginning of January, 2011 it shot up nearly 15%. It wasn’t until after the market went up by 15%, most likely too late, that we were informed that we were “missing the boat” and we simply didn’t get what was going on. Here we are in the middle of March, the markets look to be heading down again, and as it stands right now, no real progress has been made since January. The point is, despite how “obvious” things look from time to time, nobody knows where the market will go, which is exactly why we have some equity exposure but have given ourselves the opportunity to increase it when the timing looks better. Anyone who substantially increased their equity exposure since January has really increased their risk, but so far, doesn’t have much to show for it, and could be in for an unpleasant ride, but again, nothing is certain.

For now, we will maintain our current positions and continue to look for better valuations. We continue to have the Japanese people in our hearts and minds, and sincerely hope that this string of terrible events comes to an end very soon. For as much complaining we do here in Detroit, a slow economy and a bunch of snow doesn’t look so bad with a little perspective.

Visit www.sawchukwealth.com to review past issues of The Market view.

* All information is believed to be from reliable sources; however, we make no representation as to its completeness or accuracy. Please consult your Financial Advisor for further information.

* The Standard & Poor’s 500 (S&P 500) is an unmanaged group of securities considered to be representative of the stock market in general.

* The Nasdaq Composite Index is an unmanaged, market-weighted index of all over-the-counter common stocks traded on the National Association of Securities Dealers Automated Quotation System.

* Yahoo! Finance is the source for any reference to the performance of an index between two specific periods.

* Opinions expressed are subject to change without notice and are not intended as investment advice or to predict future performance.

* Consult your financial professional before making any investment decision.